This is the day these two little squibbly sisters came to live at my house back in 2011. They mewled for most of the 15 mile journey back to my house. They had each other for comfort as they headed into the great unknown despite the soothing voice of the person driving the taxi to goodness knows where

I didn’t mean to get any more cats – I already had two, which I felt was sufficient. Then my friend’s father “accidentally” let out her two six month old kittens who were in season. Needless to say, they partied and came home pregnant. She hadn’t managed to book the appointment to get them spayed before they came on heat and was keeping them in until she could get them to the vet. Oh well. Ten more kittens later ….

She posted pics of the newborns on Facebook and I jokingly said “keep one for me” (well it was only a half joke). When they were getting close to the time of adoption and she was having trouble rehoming them, I finally decided to bite the bullet. Rather than just have one, I decided siblings would be better – my other two were six and twelve at the time and I thought it was unfair to have a boisterous kitten hooleying around the house and disturbing their peace. So Charlie and Cara came home. Unfortunately, the lack of handling when they were small meant that they are pretty timid and they hid in the carrier for most of the first day. I left them to it and allowed them to decide when it was time to explore. By the end of the first day, they had wobbled their way out of the carrier, climbed up the side of the mountain which was my sofa and sniffed and tentatively approached me. They decided that I was possibly OK and we went on from there, nice and gently.

Two months on and they did everything together and were very close, always curling up with one another, playing frantically for half an hour and then crashing out and sleeping the sleep of the dead for two hours. They made me laugh every single day with their antics. They loved one another. 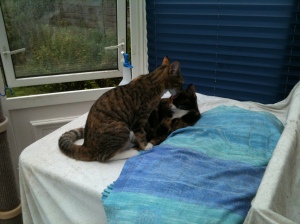 Then something changed. I have no idea what.

They have turned into the most beautiful girls and I love them both to bits. Unfortunately they don’t feel the same about each other. Charlie hisses and growls at Cara whenever she sees her and Cara looks like a startled rabbit. Every time. Charlie will even hiss and growl at me if I touch her when Cara is within view. There isn’t anything more directed at me than hissing and growling but I find it a little disconcerting when you’re holding a cat and she’s purring and then she starts growling just because she’s caught sight of her sister!

The last two years they have existed as separate entities: Charlie has her special places in the house and doesn’t mix with the other three. She won’t sleep in the same room that they inhabit but is always happy to see me, will purr loudly and lick my hands and rub herself on me when she’s getting a fuss and will indeed solicit a fuss when I go into “her” room.

Sadly, they are both still the most timid cats I’ve ever had. Sudden noise and movement still startle them. They leg it away from pretty much anyone other than me at top speed most of the time although occasionally they’ll be brave and walk through the room when a stranger is present. They even get scared by me on occasion if I’m wearing the wrong clothes or shoes.

So nowadays, they live separate lives. Here’s Cara watching the Tour de France and Charlie just lounging around on the sofa!

8 thoughts on “About Charlie and Cara”